Immigrant families living in the United States are often faced with the challenge of either raising their children monolingual or putting the emphasis on also teaching them their ancestral language. The Armenian community in Los Angeles lives in a bilingual and bicultural reality where they must navigate their way through at least two languages and two cultures on a daily basis. Trying to maintain one’s traditional and cultural norms as well as pass them down to the next generation is as important to the Armenian community as it is to any other minority group in the greater Los Angeles area. Language is one of the biggest aspects of heritage identity and plays a crucial role in maintaining that part of one’s self.

Within the Armenian community, parents are faced with decisions about how to facilitate their children’s language development in their heritage language. Choosing Armenian daycares, which are quite popular in Los Angeles, has been a widespread means for introducing Armenian children to their national identity, language, and traditions at a young age. Many of these Armenian daycares are home based and have been operating for 10 to 20 years caring after many children of Armenian descent.

My research interest towards the topic of raising bilingual children led me to one of these Armenian daycares. I was curious and wanted to understand how Armenian children navigated between the two languages, English and Eastern Armenian, especially during play time when the children were given creative freedom to choose what to play, who to play with, and most importantly which language to communicate with their peers. I spent around two months observing these children. The information documenting their interactions were gathered mainly through video recordings. In addition, I provided questionnaires for parents to share details regarding their family’s unique linguistic background, which included observations of their children’s language use in the home. These parents were all first-generation immigrants from the Republic of Armenia. The primary language spoken by all the families was Eastern Armenian (one of the two varieties of Armenian, the other variety is Western Armenian).

My observations exceeded my expectations as I witnessed children’s ease in manipulating language in both English and Eastern Armenian. Throughout their designated play time, the children learned from one another, efficiently tutoring each other in two languages while also developing a sense of identity as multilingual speakers. For instance, children translated words and/or phrases for each other; switched the language of dialogue based on the proficiency of the listener, and asked each other questions about both languages including specific meanings to given words. All of these speech practices showcased their metalinguistic awareness (speaker’s awareness of the languages they speak) of their own linguistic abilities as well as the proficiency of their peers in either of the languages. By focusing on the metalinguistic aspect of their communications, my goal is to show the advantages of growing up as simultaneous bilinguals, which helps children develop a strong sense towards the linguistic nuances earlier then their monolingual peers. My aim is to illustrate the masterful ways children play with language and incorporate language in play, while simultaneously developing their linguistic skills and understanding of language politics and practices.

This project brings awareness to the underrepresented community of the Armenian American diaspora and fills the gap within the field of similar studies conducted with children. It also highlights the important role children play in their own language socialization and the socialization of their peers. Although this study concentrates on the Armenian community, it opens a window into the world of immigrant children growing up in the linguistically dynamic city of Los Angeles navigating their way through two (in some cases even more) languages while also developing an understanding of their own identity as a multilingual person. As I continue to develop this project further with the goal of co-authoring a publication with Dr. Erica Cartmill, I hope that my work will be useful not only to scholars, but also policy makers, language teachers, parents, and caretakers. My goal is to show the vibrant linguistic environment that children grow up in, highlight the benefits of bilingualism and multilingualism, and encourage the maintenance of the heritage language within the diaspora communities. 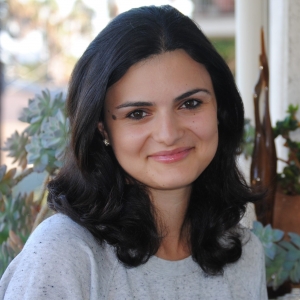 Lilit Ghazaryan is a graduate student in the UCLA Department of Anthropology. Her fields of study are Linguistic Anthropology, Language Socialization, and Multilingualism. Her research focus includes metalinguistic awareness, peer-group socialization among children, and the Armenian-American community in Los Angeles.

Any Plans for the Summer? Enroll TODAY in an Online UCLA Summer Course

Word of Mouth: What an LA Auditory-Verbal Preschool Classroom Is Teaching Me About Spoken Language Development
0 replies